Kazuki Tokaji is a professional guitarist from japan. He loved to play the guitar from the age of seven years. Kazuki has been playing the guitar for many high brands including Hollywood, His specialization is pop, rock and metal. Kazuki is the award winning guitarist with 17 years of experience. 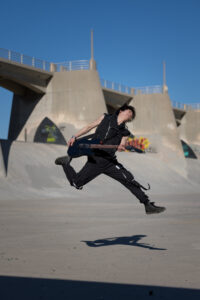 Check Out his Facebook To reach his new updates

He started the music study from the musicians institute of Hollywood. Being at the study level he joined many famous musicians and performed with many talented artists, including Steve Vai and Marty Friedman.

Being an enthusiastic Guitarist Kazuki is also keen to perform on Japanese TV & Radio. A star with rising talent and best experience, Kazuki is the future of screens.

Little More About Him:

Kazuki is also a guest at various Los Angeles events such as The Sunset Jam, & Ultimate Jam Night. He enjoys this journey towards success that is really nearing.

As the amazing story is being written. Kazuki has launched his new solo single “At the Helm of Despair,”. That is really surrounding the music world. The song is released by the famous band and is available on iTunes and Spotify.

During an Interview Kazuki said that he is very excited about the new solo. It was a collaboration between keyboardist Derek Sherinian of Sons of Apollo, and Kitsune drummer Sebastian Konnnackel. It’s a progressive metal song with a real edge.”

The band’s new released single solo is just beyond the feelings that are really overcoming grief. Kazuki always wanted to play the guitar since childhood, which has made him come to this level.

Tokaji discovered his love for music and rock and roll at an early age, But the road to this success was not that easy for him as he also faced the problem in english. But as he continued his studies, He was getting great in the music and he started performing in different bands during his study.

After he graduated, Tokaji joined several bands which in turn toured Tokyo, Nagoya and Osaka, before striking out on his own as a solo artist and recording and performing throughout Japan, even joining the metal band Agra on stage during one tour.

But once he arrived in the U.S., he performed with several bands in the studio, before joining Circle the Earth where he found common ground with his fellow rockers.

How jewelry brands are fulfilling your desire?

How jewelry brands are fulfilling your desire?

What Parents Can Buy For A New Big...

Looking for a PS3 at cheap prices!!!

Prepare Older Siblings For The Arrival Of New-born

Prepare Older Siblings For The Arrival Of...

5 Reasons Why Bigg Boss is more...